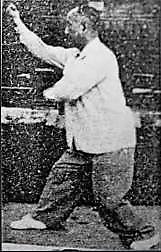 Hsing-I is one of the major “internal” or Wudang styles of Chinese martial arts.  It is characterized by features of aggressive shocking attacks and direct footwork.  Despite its hard, angular appearance, cultivating “soft” internal strength or qi is essential to achieving power in Hisng-I Chuan. Hsing-I practitioners use the five elements as an interpretative framework for reacting and responding to attacks, also referred to as the five fists.  This is generally taught first to develope a strong foundation. Hsing-I Chuan is based on twelve distinct animal forms, these emulate the techniques and combat tactics of the corresponding animal, and are taught at a higher level. In Hsing-I Chuan Chen Pan Ling studied directly under Liu Tsai-chen and Li Tsun-I from the Lui Chi-Lan lineage.