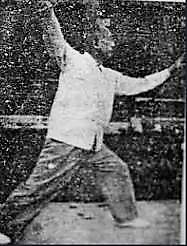 hen Pan Ling’s lineage is like the whos who of the greatest masters of China at the time, In Tai Chi Chuan his teachers were Wu Chien-chuan,Yang Shou, Hsu Yu-sheng and Chi Tzu-hsiu, all from the Yang Lu-chan lineage, in addition Chen Pan Ling visited Chenjiagou (Chen Village) on several occasions to conduct further training and research One of Chen Pan Ling’s lasting legacies is his 99 pattern Tai Chi form he formulated in 1941 at the Nanking Institute and was dubbed the Authentic Tai Chi Chuan form of China.  It is a beautiful mixture of Tai Chi, Bagua and Hsing- I.  It is sometimes known as Nanjing Integrated Tai Chi. Tai Chi Chuan, while most commonly recognized for it’s health benefits, has a myriad of martial arts applications and is a very complex and comprehensive style of internal chinese martial arts